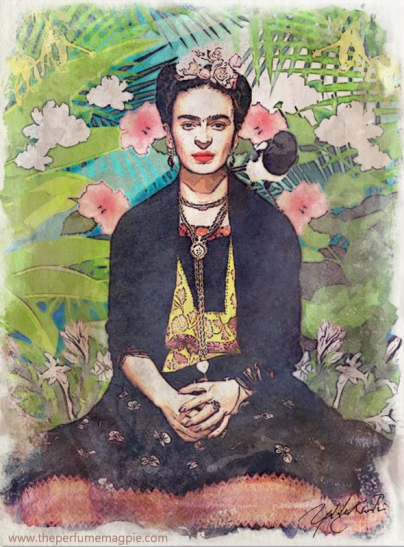 Well, you know, I couldn’t help creating an illustration of Frida with a magpie… | Illustration by The Perfume Magpie

Painting is one of the greatest ways to confront, express, and release your inner most struggles. At least that was the case with me in my teen years. The canvas was my battlefield. Fear, anger, grief, guilt, despair, hope, love…  Every single canvas was filled with multitudes of emotions that were buried deep behind my quiet and withdrawn demeanour. I wasn’t good at showing my emotions in front of other people including my own family. For me, painting was the only way I could freely express myself. 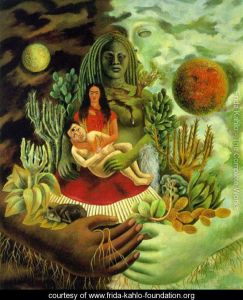 Love’s Embrace of the Universe, the Earth | By Frida Kahlo

I encountered Frida Kahlo’s paintings when I was fourteen; it was an eye-opener for me. I found their mesmerising colours and bold and esoteric imageries were weirdly in unison with my inner states. Many people are disturbed by some of her gruesome expressions but, for fourteen-year-old me, they were like embodiments of my own inner world, depicted skilfully in ways that I couldn’t bring out. Frida seemed to have known all the agonising emotions and what lies beneath. She and her work became an epitome of strength in my dark world. So when I heard about the new fragrance created by Shelley Waddington, En Voyage Perfumes, I was so curious and a little bit apprehensive to say the least.

I first tried Frida in the hottest summer month and, to tell the truth, it didn’t go well. I sampled it in the over 40 degree Celsius heat and I was immediately hit by the overripe watermelon and I couldn’t fully enjoy my sampling experience, even though I appreciated the juicy greenness peeking through it. I put the sample vial away in the “Try Again” box and decided to test in the cooler season.

A few months have passed and sitting in front of the fire has become my nightly pleasure, I finally decided to take the sample of Frida out again. Interestingly, the perishing watermelon was no more. Instead, what I smelled first was fresh dragon fruits rather than watermelons. Isn’t it funny how the climate conditions change the perspective of the same perfume so drastically? 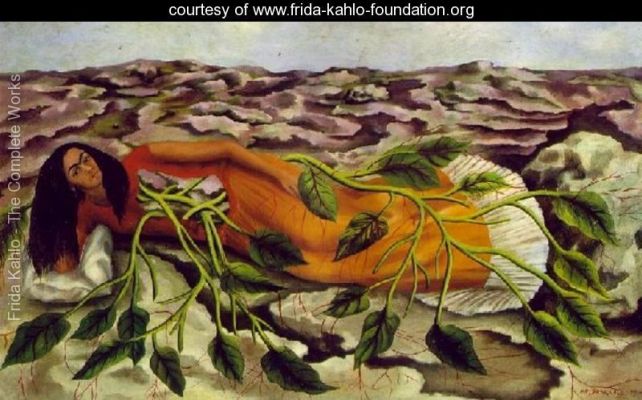 There is something very corporeal aspect in Frida. Initially it feels like a bright fragrance with juicy fruits and lush greens, but underneath the shimmering veil, there exists something physical and dangerous and it is slightly unnerving. As the top notes settle, something wild appears out into the otherwise peaceful garden. It steps out into the open; you can feel the warmth of its body, and you become aware of its body exuding the musky – and slightly sour – smell. Is it a beast or a person? Faint smooth tuberose suggests that it might be a woman but I cannot determine it. It is wounded and tired, yet valiant. After 2-3 hours, Frida reaches the dry down stage; through the remnants of sweeter notes, smoke starts rising gently. The final phase of Frida stays close to the skin and remains for some more hours. In an air of peace and a sense of silent acceptance, in the end, the being bends its knees, gently lie down on the ground and exhale its last breath.

Frida is an enigmatic perfume. What I find fascinating about the perfume Frida is that the story it tells trough its transition. The feminine side and the masculine side of Frida Kahlo, the pleasure and the pain in her physical existence, her love, her anger, and ultimately the emotional and physical relief in death…  Frida’s life was ladened with two extremes, and I cannot help thinking that she perhaps knew these two polar opposite aspects were the same essence expressed in differing degree. I don’t know whether this was the perfumer Shelley Waddington‘s intension but she certainly captured the life of Frida Kahlo and artistically created her superlative biography in a bottle.

Read what others are saying about Frida.
The Candy Perfume Boy, Perfume Polytechnic, Olfactoria’s Travels, The Scented Hound, CaFleureBon, Megan In Sainte Maxime, The Sounds of Scent, Colognoisseur, Fragrance Daily

Disclosure: Review is based on a sample I received from En Voyage Perfumes.