Which Perfume Would You Like To Wear? | Illustration by The Perfume Magpie

I’ve been thinking about doing the “scenting cats” post for months. No, I’m not talking about spraying cats with actual perfumes. I’ve seen some “pet perfumes” for sale here and there but I’m not too thrilled about the idea of covering our furry companions in them.

Let me explain first. I’m an ailurophile. Cats have been my love and comfort ever since the day I had my first cat. I love everything about cats, especially their peculiar little behaviours like sitting on an open book, staring into empty space, touching my face with their cold paws… If you are a cat lover, you know what I’m talking about. But for the past 15 years or so, I’ve been moving from one country to another and I haven’t had a chance to commit myself to a long-term relationship with a cat. So to fill my craving for feline companionship, I started photographing – and befriending with- local cats wherever and whenever I had opportunities. Most of them were feral or stray, roaming the streets freely and living the lives of their own. I have met real characters along my journey. One night when I was sorting through my cat photos while sniffing my wrist (I was testing a perfume, of course), a crackpot idea popped up in my head. I suddenly thought choosing a perfume for each one of these cats would be a great idea. Call me crackers. I know. But the perfumeland is full of cat lovers. Some of you might understand and enjoy this post.

Cats below are the ones I acquainted when I was living in Egypt. We had a ground floor flat with a front terrace and a small secluded garden and it turned out to be a cat haven. Many local cats gathered there on a daily basis to play, to socialise, and to have a kip.

So here we go.

Hannibal: Black by Bvlgari | Photo by The Perfume Magpie

We named him Hannibal because of his bizarre behaviour; whenever he was in a threatening mode, he would narrow his eyes and lick his mouth hungrily. He was a sleek, athletic, and tough loner. He never opened up to me, younger local cats were terrified of him, and he never socialised with others except for Princess (see below). He was a true gentleman around Princess. He used to guard her, share his food with her, and occasionally snuggle his face in her soft fur. In the presence of Princess, Hannibal was a different cat; a noble knight.

Perfume choice for Hannibal: Black by Bvlgari
A little bit of elegance mixed with a dash of sweetness. Like Hannibal the cat, Black is mysterious and gives out a sense of danger and tenderness- both at the same time. 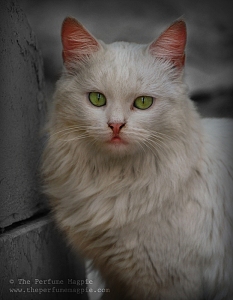 What a dainty creature she was! When I first met her, she was sleeping in the flower bed in the spring sunshine. It was right next to the garden path and there were plenty passersby but she was so still; no movement at all. I had to walk up to her and hesitantly touched her as I feared the worst. Thank goodness she was warm and soft! She opened her eyes ever so slowly and looked at me straight in the eyes. There was no fear, only curiosity in her golden green eyes. She gave an inaudible meow, and went back to sleep. Since my first encounter, I often spotted her sleeping in/on odd places and when she was awake, she was usually accompanied by Hannibal (see above). I felt she wasn’t all what she appeared to be. She was resilient and always had the air of knowing.

Perfume choice for Princess: Datura Noir by Serge Lutens
Bright yet seductive. Under her sweet and innocent look, Princess had a calculated sultriness. Appearance is such a deceiving thing. Datura Noir is a cocktail of a narcotic contradiction and I think it’s pretty apt for this beautiful cat.

They were brothers and were always close. Marmalade was bigger and more muscular than Cream and always acted like a hormone-driven teenager. He was handsome and macho but very cautious, and always followed the lead of Cream. Cream, on the other hand, was rather feminine but curious, courageous, and smart. He was definitely the brain of the brothers. When they came across something new, Cream eagerly investigated it while Marmalade hid behind him. One morning when I was mopping the terrace, Cream decided to chase and give hell to the fluffy monster. While he was happily destroying my mop head, Marmalade retreated to a safe distance and watched his brother bravely battling against the abominable creature. Now, I’m not proud of what I did to Marmalade next. I lifted the mop and put it on top of his head while he was distracted by birds in the bush. I’ve never seen a cat jump so high in my life. He toppled the bucket over, knocked plant pots off the staircase, and managed to turn the garden sprinkler on… Pure mayhem. A moral of this story: don’t underestimate the force of a scared cat.

Marmalade: Dzing! by L`Artisan Parfumeur | Photo by The Perfume Magpie

Perfume choice for Marmalade: Dzing! by L`Artisan Parfumeur
I cannot explain why but the first time when I smelled Dzing!, I immediately thought of Marmalade. Maybe the cat fur like smell in Dzing! or maybe the orangey  colour image I associate with this perfume. Who knows.

Perfume choice for Cream: Aqua Universalis Forte by Maison Francis Kurkdjian
Cream’s strong eagerness to know and learn things truly impressed me. He was a great observer and he soaked up all the information like a sponge. Aqua Universalis Forte’s uplifting and invigorating qualities fit perfectly with this cat’s attitude to life. 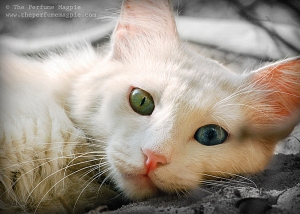 Now who has a dirty mind here? We called him Deep Throat because of his hoarse and raspy voice. He couldn’t meow; it was consistently “ugh, kuh, grrh”. Deep Throat was an extremely friendly chap with gorgeous odd eyes and he used to visit us daily. He loved a fuss, purred like a tractor, and always drooled all over my hand. This fluffy giant had a big heart and he was often seen looking after younger cats. Cream (see above) had completely taken to Deep Throat and decided he was the ultimate role model and used to mimic whatever he did. Deep Throat drank water off his paws, so did Cream. Deep Throat enjoyed belly rubs, so did Cream. Deep Throat loved tapping a keyboard, so did Cream. Because of his loving nature, he had plenty patrons. He was a bit of social butterfly.

I strongly suspected that he was the father of Marmalade and Cream. Ginger Daddy was the godfather of the neighbourhood and acted as if he had no care in the world. He was a de facto leader of the vicinity and his demeanour clearly showed it.  Autumn came, and with it arrived the mating season.  As yodelling of cats intensified around blocks of flats, Ginger Daddy’s eyes got set on Princess. Inevitably, that brought clash between Hannibal and him. Blood chilling yowls shattered the silence of otherwise peaceful afternoon. As I looked through the window, I saw two of them trading blows in a ferocious battle in my garden. Also there was Princess, tall and graceful, perched on top of the wall, watching two toms fighting over her. Ginger Daddy was older, bigger, muscular, and had years of battle experience than Hannibal. Despite all the odds against him, at least on this round, Hannibal pulled through. Suddenly Ginger Daddy dropped his stance and walked away into the bush with twitching tail, as if to say he was never interested in the fight in the first place.

Perfume choice for Ginger Daddy: Herod by Parfums de Marly
Not loud, not forceful, but Ginger Daddy exuded an air of authority with a slight touch of sweetness. Marmalade loved Ginger Daddy and on one occasion, I saw Ginger Daddy grooming this young orange cat. Assured and warm. Herod comes to my mind.

Do you love cats? Do you live with them? If you were to choose a perfume for your furry companions, what would it be?