It’s summer. This is Spain. It gets hot. I know.
But it has been insanely hot even for this place. When the mercury rose to 47.0 C, I felt like a chicken (or magpie) slow grilled on a kebab rotisserie.

In the midst of this heat wave, I had a little business to attend to in my regional capital Valencia, I left my little mountain village for the muggy city air for 2 days.

Somehow it smelled like everyone on the street was wearing Prada Candy, or at least one of those sweet sugary perfumes in the city. In the 35 degrees heat coupled with 89% humidity, it was unbearably sweet and sticky. A lot of these caramel coated people were heading towards the shops with bright red “rebaja” signs.  “Rebaja” in Spanish means “go and hit the shops”. Well, it actually means “sale” or “reduction” to be precise. My intension was to join the crowd to this biannual pilgrimage to the shops but just observing a mile long queue of people snaking down the arrays of clothes to pay for the finds was enough for me, I just turned around and went back into the street.

Then I spotted a neat looking Jo Malone store surrounded by the high street shops. To be honest, I’ve never been a huge fan of Jo Malone fragrances. The first time when I tried a few, I thought they were a bit too linear and lacking the lasting power. But the inside the store looked so cool and the neatly arranged bottles were so pretty and inviting in the evening light. Above all, there was nobody inside… I told myself that everyone deserved a second chance and walked into the pristine looking shop. 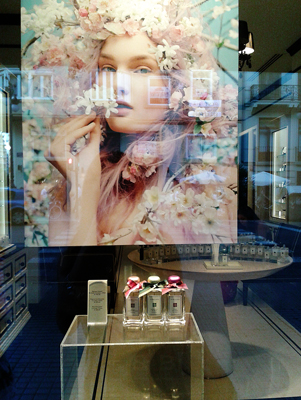 In the store, I first tried Peony and Blush Suede. This was a surprise. It smelled so much stronger and heavier than the other Jo Malone I sampled before. Sweet florals with a touch of dryness. Not bad. Next was Wild Fig & Cassis. It was so green and leafy. It reminded me of Philosykos but sweeter and more powdery. Unfortunately, it wasn’t my cup of tea. Then Cologne Intense Tuberose Angelica. I liked it a lot. It was a smooth tuberose fragrance with herby angelica note. But do I need another tuberose fragrance? I also tried Dark Amber & Ginger Lily, also from the Cologne Intense line. I loved the combination of its sweetness and the bite. It was complex with multi facets, almost un-Jo Malone. I asked the nice patient guy at the store if they had this in 30ml bottle. Apparently not. When I was about to walk out with the test strips in my hand, I spotted Earl Grey & Cucumber on the shelf.

10 minutes later, I was walking down the street carrying a sleek cream bag adorned with a black ribbon.  My partner asked me which fragrance I bought. “Earl Grey & Cucumber”, I said. “I could have crushed loads of cucumbers from our veggie garden! Mix some tea and flowers and fruits, it would have been the same!!” was his reply. Never mind. He is not a perfumista.

Earl Grey & Cucumber is a well balanced cologne.  It is fresh, yet, gentle and cocooning. The zesty and slightly bitter opening soon settles into the heart of this fragrance; a cool sweetness.  Yes, it’s cool and sweet at the same time. I don’t normally enjoy aquatic note in fragrance but it is not in your face in Earl Grey & Cucumber. It adds nice simmering effect to its aromatic musky elements of this fragrance. The honeyed note intensifies as it dries down, but it never becomes overly sweet. The actual tea isn’t listed in the ingredient but it has got a distinct tea feel. It might sound weird but the image I get from Earl Grey & Cucumber is a perfect tea & waffle breakfast in the beautiful country garden. A crispy summer morning, dew still on the petals, everything is waking up and the flowers start to open in the warming sun light. On the table in the blooming garden, there is a fine looking bone china tea set and you suddenly catch the aroma of the tea and the waffle in the gentle breeze…

It was an impulse purchase.  Like the other Jo Malone colognes, it is delicate and it stays close to the skin after the initial blast. The lasting power isn’t too great but this lasts longer than other Jo Malones I’ve tried. On my skin, it lasts about 4 hours. In the summer months, I have multiple showers throughout the day, so the longevity isn’t an issue anyway. It is nice and refreshing in the summer heat and I really enjoy wearing it so far. When the weather gets this hot, my taste in fragrance changes and many of my favourite fragrances get pushed aside into a no-go area. Earl Grey & Cucumber turned out to be a good addition to my summer fragrance collection. I should also add that I managed to revise my unfairness against Jo Malone colognes.

Read what others are saying about Jo Malone Earl Grey & Cucumber.
The Scent Critic, Perfume Shrine

Disclosure: Review is based on a 30ml bottle I own.